1. How do you differentiate an anterior from a posterior nosebleed?

Whether you’re sitting high in the bleachers of a baseball game or treating a patient in the Emergency Department, nosebleeds can be an extremely frustrating, common, and sometimes even life-threatening disease process.  Nosebleeds have been reported to occur in over 60% of the general population at some point in their lifetime (Pollice, 1997).  One of the key aspects of the evaluation of a nosebleed, although very difficult, is differentiating between an anterior and a posterior nosebleed. They often require similar treatment principles of tamponade, but different equipment/materials, prognosis and dispositions. 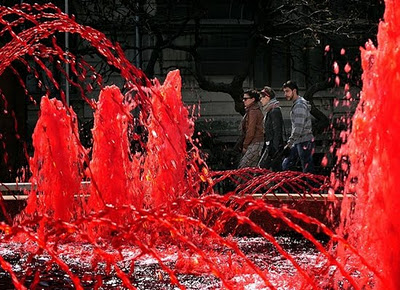 If history does not provide the clear answer, proper inspection with insertion of a nasal speculum can often help to define the origin when a bleeding vessel is visualized.

If both history and physical examination still leave you in the dust, anterior nosebleed treatment failure may be the only method of differentiating the two.  Although there is a paucity of evidence on this topic, it is reasonable to conclude that if brisk bleeding continues, especially into the oropharynx, despite placement of bilateral anterior nasal packing, a posterior source of bleeding is likely.

In the fifth century BC, Hippocrates documented the use of intranasal packing as one of the primary treatment methods for epistaxis (John, 1987).  Nowadays a variety of nasal packing options exist at the disposal of the emergency practitioner including gauze ribbons, nasal tampons, and nasal balloon catheters.

Gauze ribbons impregnated with an antiseptic are one of the oldest forms of nasal packing, still used today: practitioners insert the gauze layers in an accordion fashion to fully pack the anterior portion of the nose.  The advantages include a relatively low cost and packing that effectively fills the irregular contours of the nose.  The downside, however, is that oftentimes specialty equipment, skill, and extra time is required (Corbridge, 1995).  A study of 50 patients by Corbridge, et al., compared BIPP impregnated gauze ribbons (similar to Xeroform) to a Merocel© nasal tampon and showed no statistically significant differences in terms of bleeding control, patient discomfort and follow-up complication rates. The nasal tampon was found to be easier to insert (Cordbridge, 1995).

Nasal tampons, often made of a foam-based polymer, (i.e. Merocel©, Rhino Rocket©), as well as nasal balloon catheters (i.e. Rapid Rhino©) have the advantage of easier and more rapid placement, as they may be inserted blindly. Their convenience and speed comes at a significantly higher cost per patient.  A prospective randomized controlled trial of 40 patients by Singer, et al., compared the nasal tampon Rhino Rocket© to the nasal balloon catheter Rapid Rhino© and found that they both had similar rates of successful tamponade. The Rapid Rhino© balloon catheter, however, had a significantly lower pain with insertion score with a mean difference of 18 (95% CI 1 to 35) on a 100 point visual analog scale as well as a significantly lower pain with removal score with a mean difference of 12 (95% CI 1 to 25).  The Rapid Rhino© balloon catheter was also found to be easier to insert by the practitioner (Singer, 2005).  Another similar, prospective, randomized, controlled trial by Badran, et al., showed similar results (Badran, 2005).

Although not commonly done in the United States, a recent article supports using the injectable form of tranexemic acid topically, via saturated pledgets, to control anterior bleeding (Zahed, 2013).

Complications with anterior nasal packing, although rare, include septal hematomas, abscesses, sinusitis, neurogenic syncope and pressure necrosis (Kucik, 2005).  However, one of the most feared complications with prolonged anterior nasal packing is Toxic shock syndrome secondary to dissemination of the S. Aureus exotoxin TSST-1  from the nasal cavity into the blood stream (Tan, 1999).  S. Aureus can be isolated in 33% of the patients of whom 30% produce the exotoxin (Breda, 1987).  As a result of these possible complications most physicians entreat patients discharged with nasal packing to follow up with an ENT physician (otolaryngologist) within approximately 48-72 hours, although no exact evidence exists on this time frame. At the follow-up appointment the nasal packing can be removed and a more thorough examination of the nares can be completed.

In a study by Biswas, et al., researchers examined the growth of bacteria on anterior nasal packing in those given prophylactic antibiotics and those not given prophylactic antibiotics. No significant difference was found (Biswas, 2009).  A study by Biggs, et al., in the UK, examined the effect of new antibiotic guidelines that did not require physicians to prescribe antibiotics for routine anterior nasal packing. They found that after a 6 week follow-up period with the new guidelines there were no statistically significant differences between patients under the old and new guidelines in terms of symptom scores or readmission rates (Biggs, 2013).  Furthermore, Pepper, et al., conducted a prospective study of 149 patients requiring anterior nasal packing over a 6-month period. Half the group received prophylactic antibiotics and the other half did not. Neither group developed any complications from the nasal packing except for mild otalgia (Pepper, 2012).

In addition to the lack of evidence supporting its benefits, antibiotics may also result in significant side effects including diarrhea, allergic reactions, and may breed further antibiotic resistance.

Although the evidence against giving prophylactic antibiotics for routine anterior nasal packing seems strong, an overwhelming number of ENT physicians still prescribe antibiotics for the duration of the packing.  Although no evidence exists on this aspect, some argue that it may still be prudent to provide antibiotics to special populations of people including those with packing for > 48 hrs, the immunosuppressed, diabetics, and the elderly.

Bottom line: Most patients discharged with nasal packing should follow-up with an  ENT physician within 48-72 hours to reduce potential complications. Most patients with anterior nasal packing do not require antibiotic prophylaxis as the incidence of Toxic shock syndrome is very low.

4.    Which patients do you admit to the hospital?

It is generally accepted that most patients with posterior bleeds will be admitted to the hospital because of the risk of airway obstruction and subsequent hypoxemia and dysrhythmia.  Supplemental oxygen should be administered to all these patients on admission.  Rapid and profuse bleeding from a posterior site may require operative management, which occurs in about 30% of cases (Brinjikji, 2010).  Definitive treatment as an inpatient often consists of endoscopic cauterization/ligation of vessels, or angiographic embolization.

It may also be reasonable to admit patients with anterior bleeds that have not responded to nasal packing and other non-invasive measures.  Admission should also be considered for patients who are elderly or with COPD (due to lack of pulmonary reserve), hemodynamic instability, potential airway compromise, hypovolemia from acute blood loss, anemia, coagulopathy, or myocardial infarction.

This entry was posted in Uncategorized and tagged ENT, epistaxis, nosebleed, nosebleed treatment. Bookmark the permalink.